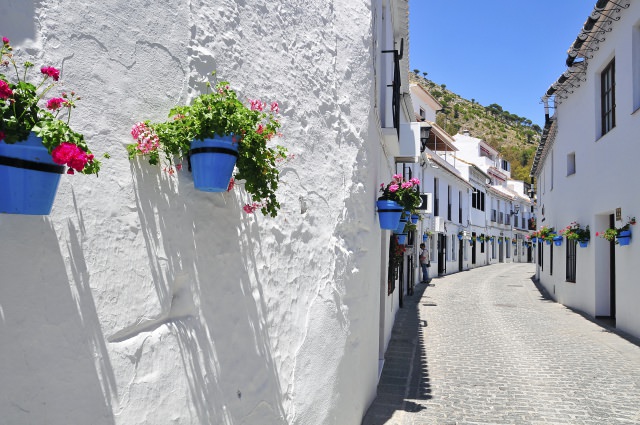 Mijas is located between the mountains and the coast of Malaga, it evokes the charm of traditional white highland villas, typical for Andalusian villages, from where you can view the coastline and the sea.

It’s a lovely village to wander around discovering its narrow streets and picturesque corners, full of life and colours, where it is a pleasure to sit down and relax, contemplating the ambience of this peculiar place. The sense of peace that surrounds you here will make you forget about the time.

The village of Mijas, declared a Cultural Heritage Site, retains the layout of Arab origin in the old historic centre, and the remains of its ancient walls have become a marvellous view point surrounded by plants, vegetation and beautiful flowers, from where you can enjoy a delightful panoramic view of Malaga coast.

The chapel of the Virgen de la Peña, dating from 1548, is carved in the rock by Mercedarian friars. A unique monument not to be missed due to its beauty and its spectacular arboreal and coastal environment.

The sixteenth century church of Immaculate Conception is situated on a hillside that also features a castle and a mosque, the latter is decorated with coffered ceiling in its central nave and a bell tower.

Several eighteenth-century chapels, such as San Sebastian, Our Lady of Cures, San Anton and Calvary, the latter located in the foothills of the Sierra, are interesting sites to visit.

Plaza de Toros, a curiously shaped bullfight arena of Mijas, is inaugurated in 1900. This arena is oval and has a quadrangular exterior, situated on the rock, breaking all architectural norms of such buildings. On the outer walls, there are several ceramic plates which represent the performances of great bullfighters of the epoch.

A typical tourist attraction of Mijas is a donkey taxi service, a peculiar environmentally friendly means of transport. It originated in the sixties and today you can go on a tour around the village streets riding a donkey or in donkey carts.

This white village in the highland of Malaga, where the efforts has been made by the local people to carefully preserve its original character, became a great attraction for tourists thanks to its white houses, flowered windows and the multitude of establishments such as gift shops, lively restaurants, bars … and plenty of green areas to stroll around, enjoying the beautiful landscapes.