Malaga’s history is linked to many illustrious figures that, since ancient times, and it has shaped in the aesthetic and folkloric side of the city. In addition, it has made it to become one of the most important cities in Spain. However, today, we want to highlight a person who has a monument at the entrance to the main street of the historical city center, who collaborated and worked for Málaga’s industrialization, and whose legacy continues working in Málaga through different companies and strategic sectors. We are talking about the ‘Marqués de Larios‘.

On August 16th, in 1895, the Malaga City Council and the mayor, Ramón María Pérez de Torres, took note of the initiative launched by local newspapers and municipal directors, who were proposing the creation of a tribute statue to Marqués de Larios, creating a commission in charge of analyzing the procedures and raising the funds through public subscription, which would decide between the differente proposals made by great sculptors, as Antonio Susillo, Agustín Querol, and the one that would finally be carried out, the sculptural project of the Valencian artist Mariano Benlliure.

It was a bronze sculpture, on a marble pedestal with the inscriptions of his birth, death, inauguration, and tribute, and flanking allegorical sculptures of work and the grateful city, which can be observed nowadays by locals and visitors.

On January 1, 1899 the monument was inaugurated in the place it occupies today, but it only lasted intact until April 14, 1931, at which time, taking advantage of the riots that occurred in Malaga at that time, a group of protesters threw it to the nearby waters of the Port of Malaga and they replaced it with the aforementioned statue of allegory to the Malaga worker, which remained until the end of the Spanish civil war, at which time the figure of the Marqués is restored and restored, who now, it has remained intact to date.

The situation of his monument is not by chance. The Larios family had their residence and palace in the front building at the entrance of Larios St, on the other side of the square, although the different historical events meant that the palace disappeared, giving rise, first, to a residential building (the known as ‘Equitativa Building’), and the future hotel whose works continue today. However, the configuration of the old Marqués de Larios roundabout (which is no longer such, since the pedestrianization of the flanks of the Alameda Principal has made the roundabout disappear and the road continues) has forced the monument to move towards a point closer to the entrance of Larios St, being more exposed to the public, in a somewhat lower place, and thus losing part of the greatness with which the monument once dominated from its square. 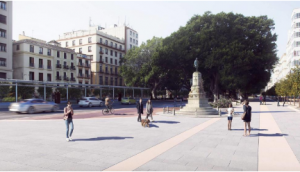 Today, the statue is an area of ​​obligatory passage for any visitor at the downtown of Malaga, who can thus meet, also from these lines, a strategic person for the future of our city and its province, and whose surname will be linked to the local business (and therefore economy and prosperity) of the city, almost indefinitely.